The Snakesblood Saga is an upcoming 6-book epic fantasy series. The first book, Serpent’s Mark, is slated for release in March 2020. 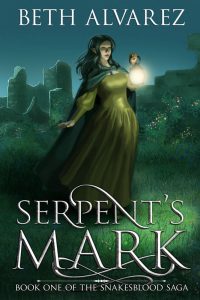 A girl without a family. A monster who craves humanity. An alliance could bring the kingdom to its knees.

The fate of Firal’s missing parents has always been a mystery, but her mother’s necklace—the royal crest given to all court mages—could provide the answer. After a lifetime training with the mages of Kirban Temple, a single trip to the capital could give Firal everything she ever wanted. All she has to do is cross the treacherous ruins of an ancient maze to get there.

But the ruins are forbidden for a reason. Exiled to the labyrinth for the scales and claws his wild magic gave him, Daemon could find freedom if he could only gain control of his power. His chance encounter with Firal changes everything. In exchange for safe passage, she can teach the control he so desperately needs.

Teaching him temple secrets could get her expelled. His reckless nature could get her killed. With her window of opportunity to meet with the court mages drawing closed, Firal is forced to make a choice—but with the secrets lurking behind Daemon’s exile and hatred fueling his motives, their alliance could cost her more than she ever believed possible.

The Snakesblood Saga is an epic fantasy adventure filled with intrigue, love, lies, and betrayal, beginning with Serpent’s Mark, book one of a six book series.

The Ithilean calendar, including a few notes on timekeeping, traditions, and holidays, and list of important dates.

You can also learn more about this series and its characters on my blog (by following the link above), Facebook page, or Twitter.

Or, to get a visual feel for the fantasy world of Ithilear, check out the story’s board on Pinterest!